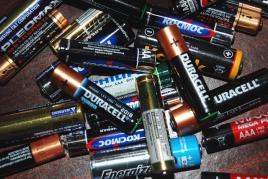 The spent batteries from the various appliances contains a lot of very toxic chemical elements, among which can be even mercury and Nickel and cadmium or cobalt. Therefore, the lack of waste disposal system of such products is a concern in many European countries. To reverse the situation and decided the heads is known in our country network of fuel filling stations WOG. Today every gas station with this logo are equipped with special containers to collect the dangerous object. After accumulating at least five kilograms of such waste these products will be sent for special disposal. A new initiative has cost the company in the amount of about one hundred thousand Ukrainian hryvnia, which does not go to any comparison with the cost of the health of the citizens of the country.

The management of the company in the person of its Director General noted that the high environmental responsibility and conservation of natural resources should be a priority for every person on the planet. However, given the constant time constraints, not everyone can always sort household waste, therefore, the endeavor of the company is aimed at facilitating this important task. The availability of specialized bins at the station will help many vehicle owners get rid of dangerous batteries or batteries directly during the pouring of fuel in your car or after Breakfast in a roadside cafe. After all, to protect nature should be easy to attract to this task the broad masses of the population.

Without proper safe disposal of such items just falling to the ground, gradually poison the soil, contributing to its deterioration, decline in useful value and the death. After collecting the garbage toxic waste will be sent to the Lviv plant for safe processing of batteries and accumulators called «Argentum». Such action is not the first in the Arsenal of environmental activities WOG. The user known fuel network pays great attention to the equipment of its plants with solar panels and planting trees and shrubs in parks and forests. To preserve and enhance the trees are considered the lungs of our planet, we preserve their health and longevity, as well as provide comfortable living conditions for future generations, believes the governing echelon gas network.