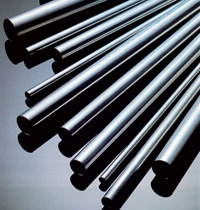 Tungsten — a chemical element, designated by the symbol W in the 6th group of the periodic table of elements of Mendeleev, with atomic weight 183,92, density 19.3 g/cm3 at room temperature. Tungsten belongs to the group of rare metals, its composition in the lithosphere of about 0,0055%. Tungsten is a light gray metal, similar in appearance to steel. The main advantage of tungsten alloy’s strength and hardness under high temperature. A steel after aging at the cooling air and the temperature of red heat lose their hardness, but tungsten in contrast — no. This quality is called the red hardness. Alloy tungsten tool steel makes possible the production of the most intense metal at a rate equal to dozens of meters per second.

This metal is due to refractoriness (melting temperature equal to 3395 + 15°C), is the basis of the most durable and heat-resistant alloys. The highest melting point among all the simple substances has only carbon. Tungsten has a very high boiling point (over 5500°C), very low evaporation rate even at a temperature of 2000 °C and a significant electric resistance: higher than that of copper is almost three times higher than that of silver five times. Tungsten has excellent mechanical properties: hardness, wear resistance at a large heating and the lowest thermal expansion coefficient among other metals. Pure tungsten is very easily processed, only the admixture of oxygen and carbon give it such a high hardness. Tungsten also has a very high module of compression and stretching, very high resistance to temperature creep, good thermal conductivity and high coefficient of electron emission, which in alloy with other metals oxides may be even much higher.

Tungsten does not react to concentrated solutions of alkalis and acids, up to 400 °C in oxygen for Aqua Regia, to 600 °C in hydrogen chloride, hydrogen 700 °C for ammonia to 800 °C in carbon monoxide and nitrogen boiling mercury the presence of moisture — chemically resistant metal.

He reacts with a mixture of nitric and hydrofluoric acids, a mixture of hydrogen peroxide and ammonia at a temperature of red heat with hydrogen sulfide, with chlorine (over 250°C) and boiling sulfur hot Aqua Regia and nitric acid, melts nitrite, potassium chlorate and nitrate, lead dioxide, sodium nitrite, bromine, iodine and fluorine. Get tungsten carbide by the interaction of carbon at temperatures above 1400° C, the oxide by reacting with the sulfur dioxide and water vapor (at a temperature of red heat), oxides of Mg, Th and Al, carbon dioxide (свыше1200°C).

The drawbacks include the difficulty of obtaining tungsten in its pure form, a large proportion (like gold) and brittle at low temperature. He’s rigid and not very ductile at ordinary temperatures. Tungsten because of its exceptional properties poorly to treatment (rolling, drawing and forging), and then only with significant heating.

Electrodes, wire and circle are the most demanded products of tungsten. As technological plasticity of tungsten is very small, but with increasing temperature it increases with the same high strength, rolled tungsten is obtained with heat treatment under pressure. First manufactured (to get the wire and rod) — using powder metallurgy get Fort. After it heats up and Raskulinecz on a rotary forging machine — and get the circles, of which after drawing get in the hot condition, the product much smaller diameter.

The use of the circle of tungsten

The circles of tungsten are used as consumable electrodes in arc welding; electrical and electronic industry — for special types of contacts that are soldered to glass, and which electronic devices energized. Depending on the surface condition, diameter, and grade, the subsequent is made directly heated cathodes used in ion sources for ion-implantation of installations and different types of heaters, for example, stirrers, hot glass and fusing of electrodes into glass production.

Large selection of high quality tungsten round stock LLC «AVEK global» can satisfy any consumer. The quality of the finished product is ensured absolute compliance with all technological norms of production. The order execution time is the shortest. If you have any questions, you will receive detailed advice from experienced managers. In the implementation of wholesale orders the company provides flexible system of discounts.